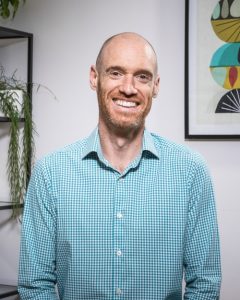 In 2001 I graduated with a BSc(Hons) and a Masters degree as a Chiropractor and began practicing full time. Over the 5 years of training I was plagued with a variety of symptoms including insomnia, IBS, bleeding gums, brain fog, bodywide aches and pains, skin rashes and skin peeling to name but a few. In the years after I qualified I was diagnosed with 2 auto-immune diseases related to joints and skin which sent me on a journey of discovery into the world of functional medicine and nutrition.

I became my own guinea pig and over a decade later I am in remission and healthier than I was at graduation but that’s only half the story.

I travelled widely studying with the likes of the Institute for Functional Medicine in the USA & researched relentlessly on why my immune system was attacking my joints and skin.

During the course of my own recovery, I developed protocols which I began to test with patients who had previously been unresponsive to Chiropractic care, standard medical care, dietican advice, homeopathy and many other therapies.

The results were both remarkable and gratifying as patients who previously had persistent symptoms of many kinds despite the best efforts of others, started to regain their health and their life.

I currently split my time between Chiropractic practice, nutritional consulting and lecturing to other healthcare practitioners.

Please note the nutritional advice given is separate and distinct from my work and registration as a Chiropractor.

You can find out more about which cookies we are using or switch them off in settings.

This website uses cookies so that we can provide you with the best user experience possible. Cookie information is stored in your browser and performs functions such as recognising you when you return to our website and helping our team to understand which sections of the website you find most interesting and useful.